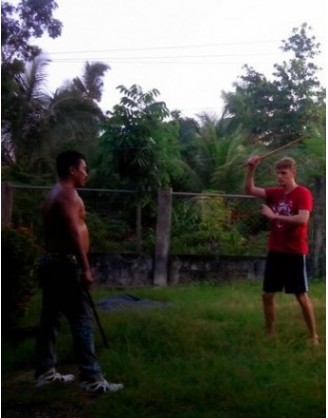 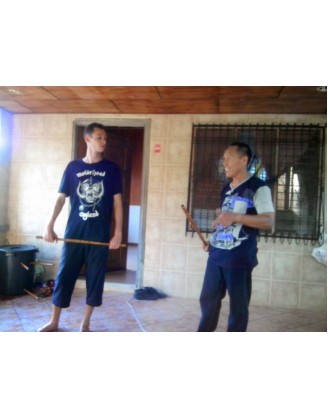 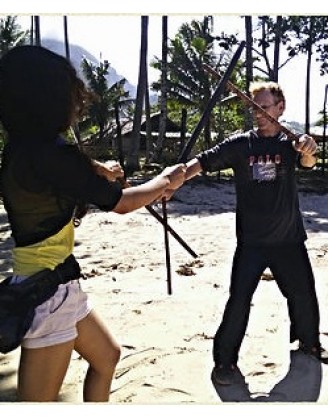 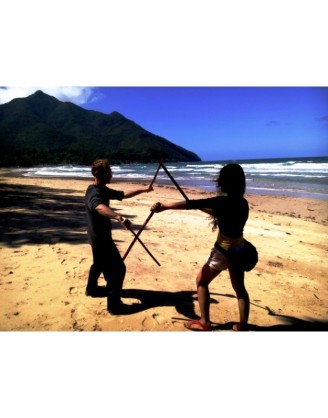 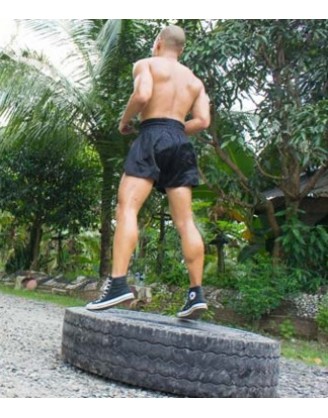 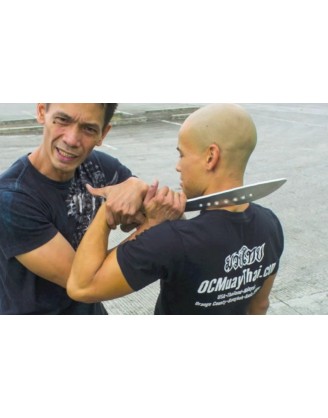 The title Filipino martial arts (FMA) refers to several styles, methods, and systems of self-defense that include armed and unarmed combat. Mostly, FMA are just “Filipino fencing,” because they include personal armed combative techniques that emphasize weaponry skills over skills in empty hands. Unarmed combat is practiced in FMA, but is traditionally studied after weaponry training. This training sequence sets FMA apart from other martial arts, especially Asian, that initiate with empty hands. Filipino armed combat is known variously as amis, eskrima (fencing; Spanish, escrima), and kali. Amis derives from the Spanish word arnes, meaning “armor.” Arnis, or “harness,” no doubt also refers to the battle harness worn by Filipino soldiers under Spanish command. Arnis-de-mano, or “harness of hand,” denotes the deft hand movements made by Filipino grooms working for Spanish officers. Lightning-quick hand movements were alleged to be native martial arts techniques in disguise. Forbidden by the Spanish to practice indigenous martial arts, defiant Filipinos purportedly retained their fighting skills in secret by hiding them inside dance forms called Santikan, Sayaw, and Moro-Moro. An alternative thesis proposes that FMA is classical fencing that evolved with incipient nationalism. Hence, FMA is the modern expression of fencing evolution.
Unarmed combat is mano-mano (Spanish; hand-to-hand), but is also kuntao and silat. To describe the plethora of FMA styles, methods, and systems is arduous; some—Doce Pares, Lacoste, Modern Arnis, and Pekiti Tir-sia—are publicized through seminars and are associated with particular instructors such as Ciriaco C. Canete, Dan Inosanto, Remy A. Presas, and Leo T. Gaje Jr., who spread the FMA in Australia, Canada, Germany, Great Britain, and the United States.
Geographically situated at the crossroads of Southeast Asia, the Philippines are located near the equator above Borneo and below Taiwan. With a population estimated at 60 million, the Philippines are larger in area than Great Britain, but smaller than Japan. Those unfamiliar with the 7,107 islands and three major regions of the Philippine Archipelago, Luzon (north), Visayas (central), and Mindanao (south), may be confused by the eighty-seven different dialects of Pilipino (Tagalong), the national language. English is the language of business and education, and Spanish is spoken to a lesser extent.
Foreign languages are remnants of immigration to and colonization of the Philippine islands, which influenced native Filipino martial arts. It is of Warrior tribesmen of the Philippines with swords and woven shields, ca. 1900. (Hulton Archive)
ten said that Filipinos have Malay ancestry, Chinese culture, Spanish religion, and American education. Mestizos are racially mixed Filipinos with Chinese, Spanish, and American bloodlines. The varied cultural milieu facilitated the blending of FMA. Filipino martial arts are a blend of at least Indonesian, Malaysian, Chinese, Spanish, American, and Japanese origins.

Filipino martial culture has both tradition and history.

The tradition is oral and the history is written. The culture was alternately destroyed and created by foreign colonization. Martial fiestas offer keys to understanding Filipino martial culture. For example, the mythical meeting of the ten datus (chiefs) of Borneo with the Negritos of Panay is celebrated annually at the Ati-Atihan in Kalibo, Aklan. Similarly, the defeat of Captain Ferdinand Magellan by Datu Lapu-Lapu of Mactan Island is celebrated at the Sinulog in Cebu. This is in conjunction with the Santo Nino Fiesta, which marks the introduction of the Catholic faith to the Philippines.
Theory posits that in a prehistoric period, aboriginal Negritos (Aetas), a pygmy race, crossed over a land bridge from mainland Asia to become the first settlers of the Philippine islands. Next, waves of immigrants from the area called Malaysia colonized the islands, around 200 B.c. Anthropological evidence shows that the prehistoric people of Southeast Asia all belonged to a single population. They were later divided into cultural groups (i.e., Filipinos, Malaysians, and Indonesians) in accordance with territorial boundaries established by their European (i.e., Spanish, British, and Dutch) colonizers.
In the ninth century a.d., trade relations began with China. Colonies were established in the Philippines during the Song dynasty (a.d. 960-1127). Kuntao, an FMA with empty-hand movements similar to taiji-quan, has been traced to Kuntung province. Chinese rivalry with the Hindus and Javanese continued into the Ming period (a.d. 1402-1424). Ancient civilizations—the Sri Vishayan and Majapahit—are prominent in Filipino history. Hindu influence includes the Tantra: a form of yoga that includes sexual magic and celebrates the feminine force. Tantric influence could explain the prominent role of women in Filipino society. Visaya means “slave” to the Moros, Muslims who dominate the southern region of the Philippine Archipelago, and refers to people of the central region whom the Moros frequently captured or killed. The Majapahit Empire was formed in Java around the twelfth century in the area of modern Indonesia. This ancient Islamic empire included Burma, Indonesia, Thailand, Malaysia, Cambodia, Madagascar, and the Philippines. The martial arts from these countries, such as Muay Thai, bersilat, and pentjak silat, have techniques, such as silat, that are similar to FMA.
Islam came to Mindanao in the south around a.d. 1380, spreading to the Visayas and Tuzon. These Muslim Malays ventured north from Borneo (Kalimantan) led by the ten datus (chieftains), the most important of whom was Datu Puti. Datu Puti, “the Great White Chief,” traveled from Borneo to Panay, from Panay to Tuzon, and from Tuzon back to Borneo, after helping the datus to settle other islands. In a.d. 1433, Datu Kalantiyaw, third chief of Panay and descendent of Datu Sumakwel from Borneo, issued or codified civil and social orders called the Kalantiyaw for guiding his people. Although its authenticity is questionable, the eighteen commandments of the Kalantiyaw code may be one of the few written records surviving from pre-Spanish times.
Western history of the Philippines begins with Captain Ferdinand Magellan landing on the island of Cebu in the central Visayas on April 15, 1521. The conquistador was circumnavigating the globe and claiming lands for the Spanish Crown. The name Philippines comes from the Spanish version of “Philip’s Pines,” the name Magellan gave the islands as he claimed them for King Philip II. In the Battle of Mactan, near Cebu, Captain Magellan was killed while retreating in the surf from an attack by native forces led by Datu Lapu-Lapu. The Spanish colonial period brought Catholic religion to the Philippine islands and helped to unify them into a single nation. Independence from Spain was declared on June 12, 1898. The Filipino revolution for independence was led by secret societies, such as the Katipunan. Most Katipunan members were Freemasons following pre-Spanish traditions and were known to practice both Filipino Martial Arts and Spanish swordsmanship. After the Spanish-American War, the United States got Puerto Rico and the Philippines as booty.
The U.S. forces fought a guerilla war against the Moros in Mindanao to claim the islands. Fierce resistance from local Muslim tribes caused the United States military to recall the .38 caliber revolver and issue .45 caliber revolvers to increase stopping power. Moros tied tourniquets on their limbs to prevent blood loss and charged into the American trenches. The nickname “leatherneck” refers to the United States Marines’ wearing leather gorgets around their necks to stop the Moros from cutting their throats.
Japanese imperial armed forces invaded the Philippines and occupied the islands from 1942 to 1945. An ideological battle was fought for the soul of the Filipino people, who were reminded by the Japanese that despite their history under Spain and America, they were oriental, not occidental. The Japanese encountered fierce guerilla resistance in the islands from Filipino nationalists and their American allies. Following General Douglas MacArthur’s historic return landing in Leyte, the Philippines headed for self-determination. There is an indelible mark on the Filipino psyche from the Japanese occupation during World War II. Some of the two-handed stickfighting styles, such as Dos Manos in Doce Pares Eskrima, were developed to encounter Japanese swords. After the American commonwealth ended in 1946, the Philippines developed like other former Spanish colonies as an agricultural society.


Filipino martial arts include many types of skills

If you want to book and train any kind of Martial Arts around the world, please, choose only reliable and tested GYM's and camps, such as those listed at category Eskrima, Arnis, Kali. We collect and publish reviews about all camps and school around the world, if you want to write review about Eskrima, Arnis, Kali, please use tab Review in camp description block above.